Some of the more challenging environmental forensics questions require detailed characterization of the hydrocarbon impacts using an extended gas chromatographic/ mass spectrometric (GC/MS) analysis for petroleum biomarker compounds. Bureau Veritas provides this qualitative analysis for water, sediment, soil and oil samples. Results are expressed as relative abundances of key diagnostic biomarker compounds, in addition to a detailed comparison and assessment of the chromatograms.

The benefits of assessing petroleum biomarker compounds are that these compounds are recalcitrant and therefore resistant to common weathering processes (such as biodegradation) and typical petroleum refining processes. As a result, their chromatographic peak profiles provide an important “fingerprint” of the initial crude feedstock, providing an important and often compelling line of evidence in source identification.

This detailed analysis can be used to support more conclusive hydrocarbon characterization in the following situations:

Bureau Veritas’ biomarker analysis by GC/MS is based on an Environment Canada reference [1]. Data reporting approaches have been adopted from European Committee for Standarization protocols for oil spill identification (CEN/TR 15522-2) [2].

Samples are extracted or diluted, in instances where free product is being analyzed, with hexane. The aliphatic and aromatic hydrocarbon fractions are partitioned using column chromatography. This partitioning significantly improves the chromatographic resolution of the target compounds groups. The extracts containing the aliphatic and aromatic fractions are analyzed using a gas chromatograph coupled with a mass selective detector (GC/MS), operated in both full scan and selected ion monitoring (SIM) modes. The typical run time for this analysis is over 60 minutes to maximize compound resolution. The full scan mode captures a larger amount of compound specific information allowing for characterization, while the SIM mode provides increased sensitivity in identifying key biomarker groups.

This analysis provides detailed qualitative information on target petroleum biomarker compounds and compound groups that are commonly found in middle to heavy distillate fuels (such as kerosene, diesels, fuel oils, lubricating oils and hydraulic oils), as well as crude oils. This approach and the selection of biomarker compound groups, is consistent with protocols outlined in the CEN/TR 15522-2 (European Committee for Standardization) document on oil spill identification. The Certificate of Analysis also provides detailed chromatograms (both total ion and extracted ion), comparing chromatographic peak profiles between samples and against laboratory reference materials.

Tables 1 and 2 provide the standard biomarker groups used in source identification based on diagnostic ratios (Table 1) and those used in estimating the timeline for a spill or release of middle distillates based on degree of weathering (Table 2).

Petroleum hydrocarbon source identification is based in part, on a comparison of recalcitrant biomarkers present in the petroleum products. The recalcitrance of biomarkers to common weathering effects such as biodegradation, results in a consistent chromatographic peak profile that does not readily change under normal environmental conditions. As such, it can be used as a fingerprint of the crude oil source material.

Evaluating the ratios of specific biomarker compounds provides an important diagnostic when comparing results between samples or against a standard reference material. These diagnostic ratios are compared to determine the degree of consistency between samples and ultimately, the probability of a match. If the ratios are consistent between samples, this indicates that the petroleum products being characterized, originated from the same crude feedstock and hence, suggestive of a common source.

This method is not without limitations. The presence of multiple impacts from different crude oil source and co-mingled contaminants can impact the variability of diagnostic ratios. Furthermore, while these biomarkers are more resistant to biodegradation than straight chain aliphatic hydrocarbons, prolonged exposure to aggressive environmental weathering regimes can affect the relative amounts of specific compounds and also contribute to variability in diagnostic ratios leading inconclusive assessments.

Based on guidance outlined in CEN/TR 15522-2, petroleum products are considered to be a match, i.e. originate from the same crude feedstock if >50% of the diagnostic ratios are within a relative percent difference (RPD) of ≤14%. The image below provides an example of select biomarker ratio (bicyclic sesquiterpanes) relative difference plotting between two soil samples. 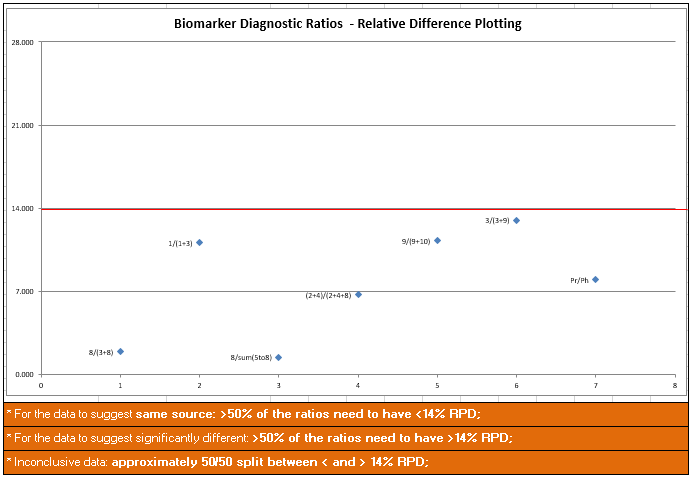 Visual evaluation and comparison of the qualitative data captured in the sample chromatograms also offer valuable lines of evidence for impact characterization and assessment of the degree of weathering. Because the method provides separate results for the aliphatic and aromatic components of an impact, both sets of chromatographic data can be used in comparing different samples, thereby strengthening the support of an argument.

The degree of weathering in a petroleum product can be assessed using specific hydrocarbon components including n-alkanes, isoprenoids, alkyl cyclohexanes and alkyl benzenes. This assessment, in conjunction with other lines of evidence may be used to estimate the timeframe when spill or release of a middle distillate may have occurred. To provide an estimate of when a release might have occurred, it is important to have detailed information that describes the in situ conditions, e.g. redox potential, aerobic/anaerobic, moisture, depth to groundwater, among others. These conditions are required to establish the site-specific weathering regime.

The image below illustrates one way that the biomarker method, using and extended GC/MS analysis, can be used to evaluate chromatograms of different constituents of a petroleum impact. 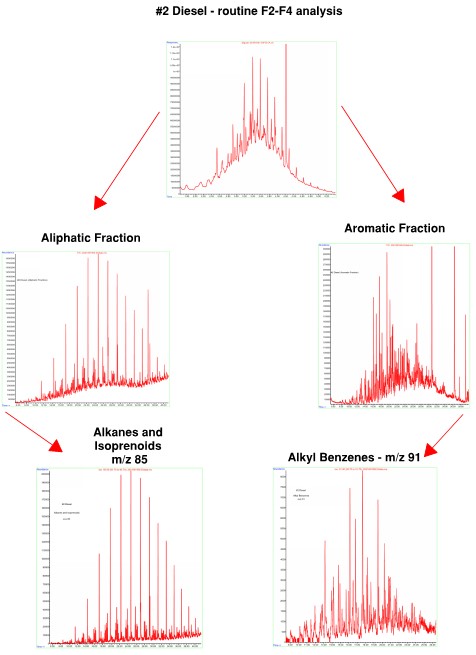 [1] Environment Canada. 2017. Analysis and Source identification of waterborne petroleum and petroleum products in samples from oiled birds and environmental matrices.