Strand of DNA in water

Environmental DNA (eDNA) testing is a scientific tool available to augment or replace conventional ecological survey methods for the detection of species of management interest. eDNA refers to the genetic material (nuclear or mitochondrial DNA) that is released by an organism such as gametes, dead skin cells, feces, urine, mucous, etc. to its environment and can be collected from that environment using water or soil sampling.

The application of eDNA testing is particularly advantageous for aquatic and semi-aquatic species as DNA shed from the target organism is transported through the aquatic environment, improving the ability to detect the target species.

eDNA testing enables more informed decision-making about biodiversity and ecosystem health due to its enhanced sensitivity over conventional methods, which are time and labour intensive, subject to observer bias and limited in ability to confirm distribution for cryptic species or those with low population abundance.

Several methodologies for eDNA detection exist. Most methods utilize quantitative polymerase chain reaction (qPCR), also known as real-time PCR, to detect the presence of a target species. qPCR is a highly sensitive and specific DNA analysis that allows for detection of low quantities of DNA through cycles of PCR that exponentially generate many copies that are visualized by the lab instrument with a fluorescent reporter dye.

Given the nature of eDNA being low quantity, subject to variables in the environment and having a varied rate of release from the organism, eDNA assay results are qualitative (detect/non-detect) as opposed to quantitative.

Bureau Veritas Laboratories has licensed the IntegritE-DNATM method from UVic Industry Partnerships, a technique developed by Dr. Caren Helbing [1] (Figure 1). The first step of this protocol is sample collection, filtration and preservation, assuring best eDNA recovery and conservation. The second step is the eDNA extraction from the sample collected. This protocol incorporates a quality check on the extracted eDNA as a third step in the form of an IntegritE-DNA™ qPCR assay to test for amplifiable eDNA extracted from the filtered water sample, but also absence of inhibitors. This is a critical step in preventing false negative eDNA results. 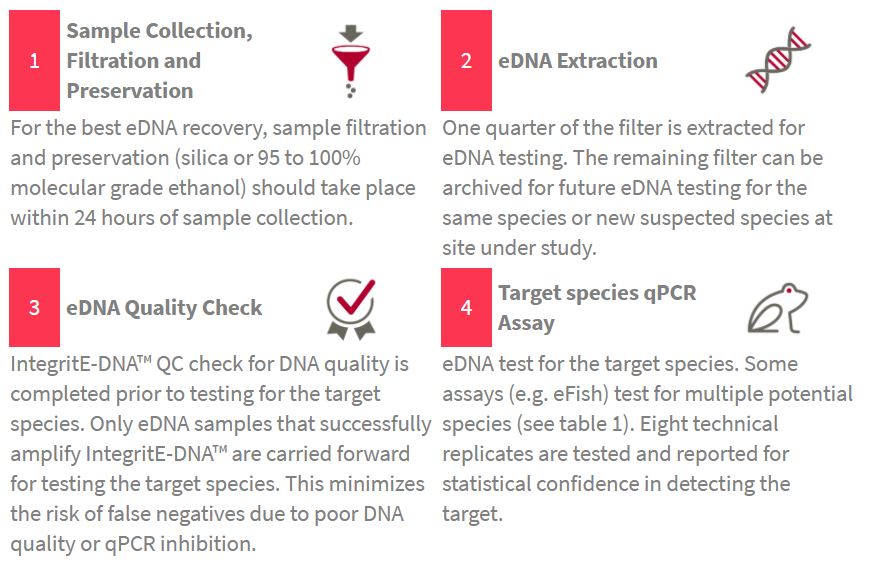 The fourth step of this protocol is a species-specific eTarget qPCR assay and confirms the detection of target species DNA. Eight replicates are analyzed for each sample to provide sufficient statistical power to confirm detection or no detection of the target species. Positive controls are incorporated into this method to ensure testing performs as expected.

The volume of extracted eDNA is sufficient for four to five eTarget qPCR assays should multiple species detection from the same eDNA extract be required. This reduces overall cost by not requiring additional sampling, filtering, DNA extraction and integrity check if additional species are to be tested.

Considering the variety of target species and their diverse habitat, there is substantial variation in methods for sample collection, filtration, preservation and processing (Figure 2).

To maximize detection rates, considerable planning and preparation of the study design is key to a successful “in the field” collection protocol and expert consultation is advised.

Prior to any such consultation, we recommend a review of the detailed discussion presented in “Environmental DNA Protocol for Freshwater Aquatic Ecosystems, Version 2.2” [2].

eDNA preservation of the collected sample is important to ensure successful testing at the laboratory. As a rule, water samples should be filtered, preserved and stored in either silica or molecular grade ethanol (95 – 100 % molecular grade ethanol), or silica within 24 hours of collection (and prior to submission to the lab). Once preserved and stored, DNA in filters should remain viable for 6 months, or longer if stored in a non-self-defrosting freezer at -20ºC or below. Lab extracted eDNA (in a buffered solution) is most stable and will remain viable for years under these same freezer storage conditions.

Considerations for Your environmental DNA Study

To ensure effective application of eDNA testing, the following must be considered:

Currently available eDNA assays are presented in Table 1. All of the listed assays are species-specific except the eFish assay. The eFish assay is a general test that identifies eDNA from 12 fish species (Table 1) but cannot distinguish between these fish species.

It should be noted, however, that the above approach leaves an important, unanswered question. What do we do for target species where no eDNA assay has been developed?

Future availability of DNA sequence data for additional species will undoubtedly allow for primer and probe design. However, a prerequisite to functional assay design, which is the availability of tissue samples (or total DNA) from target species (and closely-related species or sympatric species), presents substantial difficulty for low density/rare species and could be prohibitive for endangered species. Bureau Veritas intends to establish third party, collaborative agreements that will facilitate the development of novel eDNA assays for target species of interest.

eDNA testing has limitations that should be considered when designing the field survey and interpreting laboratory results:

eDNA testing is quickly becoming a reliable and robust technique that complements traditional environmental monitoring. It should be recognized that traditional survey techniques still have select advantages to eDNA testing, the most relevant of which may be their ability to distinguish live species and the different life stages of those species. Further, standards for eDNA testing across laboratories are not yet established but need to be carefully considered to create maximum utility of this evolving technique.

Bureau Veritas is proud to be the first laboratory in Canada accredited for eDNA testing by the Standards Council of Canada to rigorous ISO 17025 standards. We are committed to working closely with the eDNA community to develop consensus-based standards that will enable better interpretations of eDNA results.