Methanol filled vials in front of a cooler

A common concern for environmental professionals collecting samples for analytical testing is making sure samples arrive at the laboratory below the prescribed temperature limit. Based on guidance and regulation in Canada (federal or provincial) this is generally set at less than or equal to 10°C (depending on the jurisdiction). The purpose of immediately beginning the cooling process in the field is to mitigate the potential biotic and abiotic reactions (degradation, volatilization, oxidation/reduction or irreversible sorption). These reactions can and significantly decrease contaminant concentrations in the time between sample collection in the field and laboratory analysis, therefore potentially leading to a significant bias.

Due to often unforeseen logistical challenges, sample temperatures recorded upon receipt at the laboratory may be marginally above 10°C to sometimes as high as room temperature, particularly during summer months. The inability of the laboratory to quantify the extent of any potential bias increases data uncertainty and can lead to project delays, cost increases and even regulator push-back upon data review.

The most common and efficient way to cool environmental samples prior to being received at the laboratory is by using free ice. The challenge is maintaining a consistent solid cooling media for shipment or storage. Few studies have ever looked at impact on data due to marginal exceedances of sample temperatures beyond 10°C. The purpose of this 14 day study was to evaluate the extent of potential bias on analytical data associated with analysis of volatile organic compounds (VOCs) over a range of storage temperatures between 6°C and 20°C.

Blank, low level and high level samples of each matrix were prepared in duplicate and stored in controlled environments (<6°C, 10°C and 20°C ) for 14 days. Vials were removed for analysis at defined intervals (Days 0, 3, 6, 10 and 14) and analyzed in duplicate for volatile organic compounds (VOCs) that are typically regulated across Canada, including chlorinated solvents and volatile petroleum compounds (e.g. CCME F1 hydrocarbons, benzene, toluene, ethylbenzene and xylenes).

A Review of the Results

Acceptable reproducibility is typically demonstrated by calculating relative percent difference (RPD) between duplicate samples. According to Volume 4 of the CCME guidance documents (2016) [1], laboratory duplicates analyzed for VOCs, THMs and BTEX should be within RPD ≤30% for water samples. Methanol vials were spiked directly with the compounds of interest. As such, the ≤30% threshold for RPD was also used in this case.

The analytical results associated with the methanol vials indicate all parameters had RPDs below the alert limit of 30%. This is particularly notable when comparing measured concentrations for samples stored at <6°C with those resulting from the analysis of samples stored at 20°C. The graph below (Figure 1) illustrates the consistency of the measured concentrations for the most common and most volatile parameters, maintained at 20°C over the course of the 14 day study. 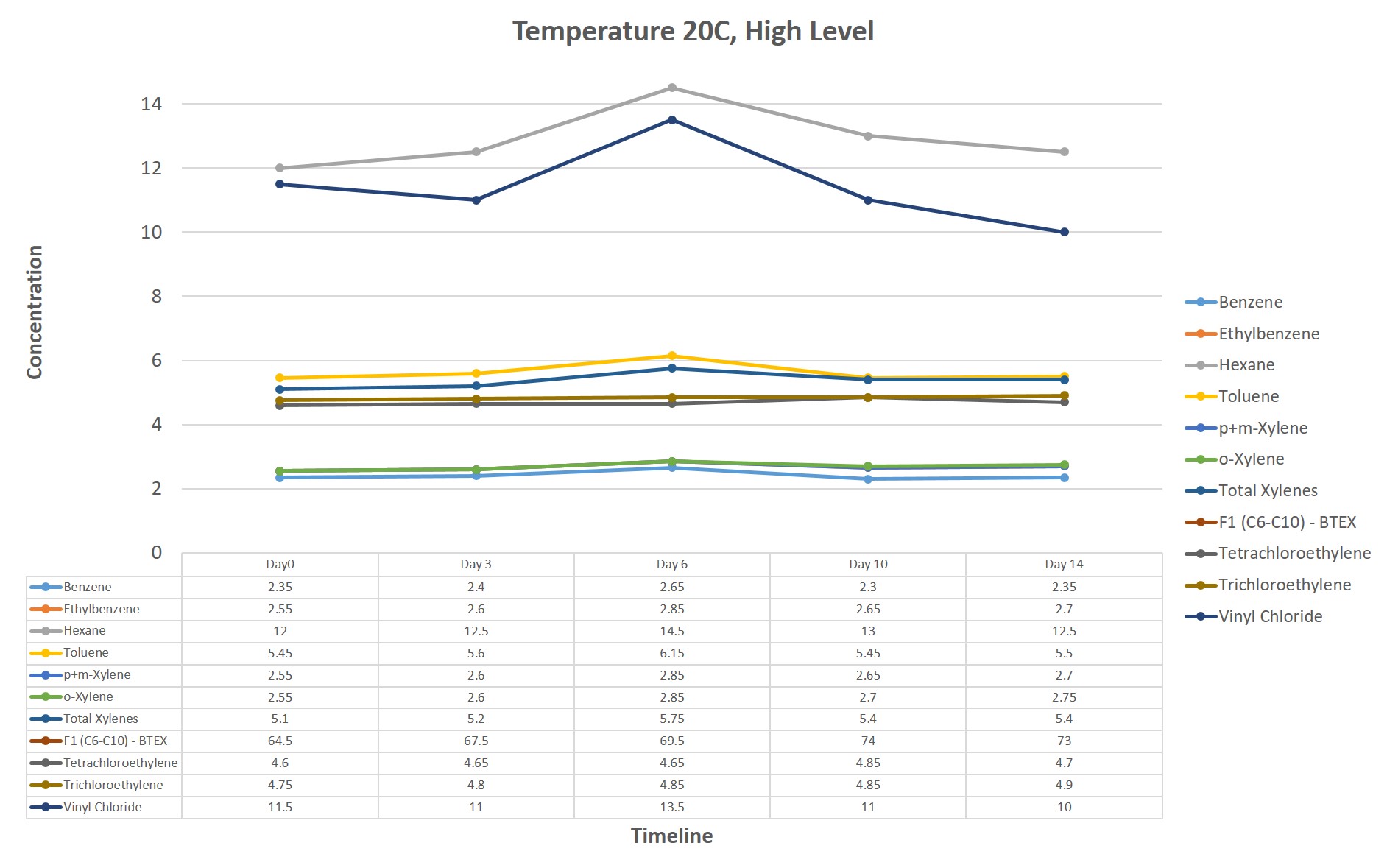 The analytical results associated with the sodium bisulphate preserved blank water vials spiked with high analyte concentrations, indicate that several parameters exceed the 30% RPD threshold over the three temperature points, as shown in the table below. These RPDs are representative of low bias between Day 0 and Day 14, showing overall loss for each parameter.

Table 1: RPD calculated between Day 0 and 14

The higher RPD (i.e. loss relative to Day 0) for hexane may be the result of adsorption to the container. Based on Bureau Veritas internal studies, it has been shown that hexane effectively sorbs to the Teflon lid of the volatile sampling vial. As well, cis- and trans- dichloropropene is expected to begin hydrolyzing at higher temperatures [2].

What does the data tell us?

The analytical data resulting from this study show that analyte loss in methanol preserved vials received by the laboratory at temperatures exceeding the required 10°C is insignificant.

Some volatile compounds in water, under zero-headspace, may exhibit sorption or degradation. Storage temperatures greater than 10°C may promote degradation of some compounds like dichloropropene, or influence the amount of sorption of some parameters to the Teflon® lid. In such cases, the associated analytical results must be validated within the context of the project’s circumstances to determine whether the data is representative of site conditions. Such circumstances may include sample collection technique, sample storage and cooling media, duration of time between sample collection and laboratory submission, as well as approximate duration sample was stored at above 10°C.