The Crystal Ball (aka Your Torque & Drag Program)

Have you ever considered what engineers do for a living? We tell you the future. Take that, Harvard Business School.

For instance, you’re about to try to drill a hole in the ground that’s roughly 4 miles long with a hard left about halfway down. (It’s engineering that’s made that possible, by the way.) How strong does your pipe need to be? Easy, I’ll just work out what tension and torque it’ll have to carry, then we’ll make sure the pipe can handle it.

If you weren’t rotating, then friction will add to or subtract from the surface-tension total. (That’s usually called “drag,” by the way.)

“But Grant, how much friction will there be?” I’m glad you asked! Monsieur de Coulomb says:

That µ is called the “coefficient of friction,” aka a “fudge factor.” Yes, I know there are ways to measure a real coefficient of friction, but none of those ways are available to us when we’re talking about a miles-long, subterranean, as-yet-imaginary hole. So we guess. (I pick 0.30, so you can’t have that one. Thbbbt.)

Of course there’s drag, you Age-of-Enlightenment nincompoop. We’re just making a stupid assumption right now that our hole is vertical, and I mean perfectly vertical over every nanometer of its length. It’s only when it’s not vertical that we can do this: 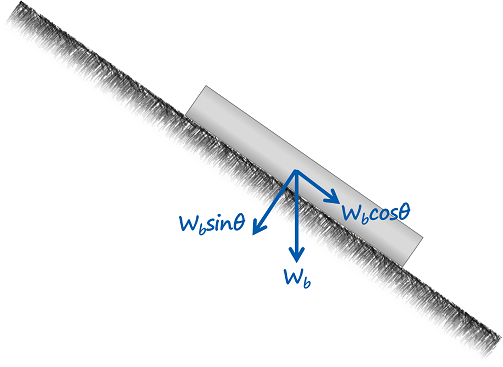 That way we can use some trigonometry to decompose the weight into two pieces: the part that causes the pipe to slide down the well (cosine) and the part that pushes the pipe into the wall, creating the normal force (sine), and thus friction. You didn’t realize your high school physics class was ever going to be useful, didja?

It’s at this point that we should ponder the fact that our string is not always pointed the same way, so it’s a good idea to cut it into pieces and deal with them individually. I’m not talking about Finite Element Analysis, where you cut the object into 3.7 bajillion little cubes. I’m just talking about chunks, maybe 30 feet long, that we can consider independently. Within those chunks, I can also consider another source of side loading that’s caused by curvature: 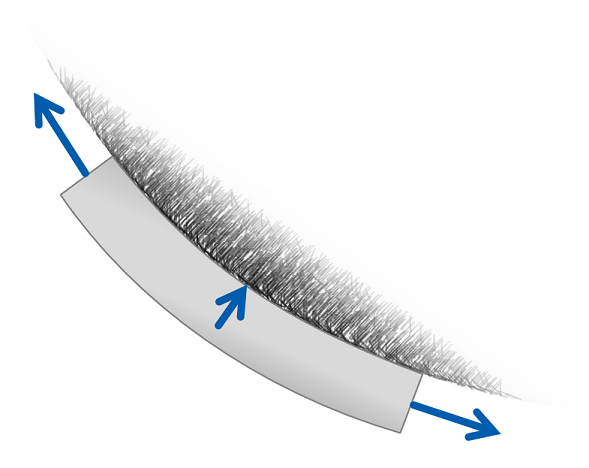 We’ll have to do more vector algebra to figure out how hard the curve pulls the pipe into the wall, adding to the normal force caused by weight (which might be subtracting if they’re pointed different directions—honestly, it makes sense, just draw the picture). Even you’re not curving your well on purpose (like in a build section), we still account for some curvature called “tortuosity” because there’s no such thing as a perfectly straight hole. Tortuosity is the amount of wiggle that we get when our wellbore deviates from the planned / perfect well path, and you can get estimates of it from your survey data.

Generally we’re using software of some sort to do this, which is great. Grant sez it’s important to start with basic concepts, though, to avoid the dumb tendency we have to presume that there’s magic fairy dust on the inside of our software programs and we could never possibly understand what’s going on in there. Truth: your torque & drag program is rarely doing anything more complicated than your high school homework. It just does it fast, and it doesn’t eat much.

For instance, one of the standard outputs you can get out of a torque & drag study is the anticipated tripping loads as you drill a hole section (i.e. TOH and TIH tension values versus bit depth). You should (I’m shaking my finger at you here) track the actual tripping loads as you drill and compare them to the anticipated values. Not so much because you want to know whether your predictions were right or wrong (although if they were wrong you should change the model parameters like drag coefficients to make the results match—that’s called “calibration,” and it’s a really good idea), but so you can see any trends that might pop up. For instance: 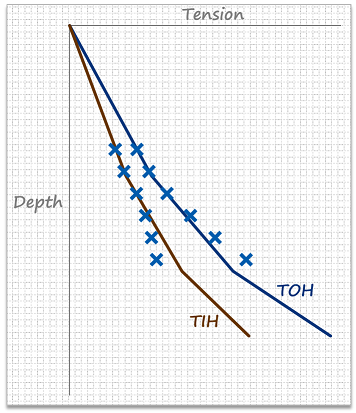 When you start the hole section everything lines up perfectly (see, I told you I can predict the future!). But as you drill farther the actual values start to drift from the calculated lines—tripping out of the hole takes more force, and tripping into the hole takes more force down, so less tension. Why, oh why, would the friction characteristics of the hole be changing? What could possibly cause a change in my wellbore that makes it more and more difficult to move the pipe? What is going to happen?!?

You’re about to get stuck, obviously, and if I had to guess I’d say you’re not cleaning your hole well enough (though there are some other possibilities). Call your driller and tell him to circulate bottoms up a couple of times; then tell him to stop cussin’ about his ROP because it don’t matter if he’s going to be fishing in a few hours. (Why yes, I do know the future.)

It’s these trends and tendencies that give you insight into your operations that you might not get otherwise. I would suggest that the awesome performance improvement we get out of drilling data analytics is the modern, computer-aided version of good engineering based on thoughtful oversight. (The buzzword “digital twin” just means “a regularly-updated model of a real-life situation.” Which has been good engineering practice … forever.)

To be fair, I can highlight a few important possible weaknesses. First, the run-of-the-mill torque & drag program that I described (and that you’re probably using) is a “soft-string” model. Consider this curvature picture a bit more close-like:

I blithely said “add up the vectors to get the side force caused by curvature” (expertly paraphrased, of course). What that ignores is the fact that it takes force to actually bend that pipe—I’m treating my drill string like it’s a rope. And that sounds like a stupid assumption.

It turns out to usually not matter all that much, for a couple of reasons. First, your drill string is maybe 5" in diameter, which is big, beefy, steel pipe when you look at it up close. But it’s also 20,000 ft long. The cartoons that we draw are not to scale (guilty) and can be a little misleading if we don’t keep that in mind. You’re drilling with a wet noodle.

Still, there is a finite force that it takes to bend the pipe around the curve, and we can calculate it. These are called “stiff-string” models, and they are most likely an option buried in your torque & drag program somewhere. Go click the box, build your model, and push the go button.

And go to lunch.

It takes way longer to calculate when you’re not just solving your high-school physics homework, but also your college mechanics of materials homework (fourth order beam equations and such). But you do get an answer, and it’s a good answer. It’s just not all that different from the answer you got with a soft-string model … if you calibrate both of them properly, and independently. See, the soft-string model will typically have a higher coefficient of friction than the stiff-string model, because that coefficient of friction is a fudge-factor that wraps up several things we don’t know all in one variable parameter.

So in most situations you can use whichever one you want—soft-string or stiff-string. You’ll get good answers as long as you take the time to calibrate properly.

Another possible weakness in our torque & drag goodness is that there’s not a lot that the torque & drag algorithm actually considers—it really is torque … and drag. Not any form of extra mechanical loading, like keyseats or ledges or green cement or junk or … (you get the idea). Without breaking into the model and/or writing your own program (something you can do if you need to, don’t be scared of learning things, I believe in you), the torque & drag model is a little simplistic.

I don’t really consider that a weakness, though, because almost all those “mechanical loads” that torque & drag doesn’t consider are bad. Remember my hole cleaning example? There was extra mechanical loading in the well because of the crap I’m leaving in the well and the way I know about it is that my program doesn’t know about it. If reality can’t match my model, there’s a good chance there’s something wrong with reality. And I need to go fix it.

So, get familiar with your crystal ball. If you don’t, I’m beginning to see something in your future: