Digging soil with a shovel

In 2017, methanol preservation became a universally adopted method for sampling and analysis of volatile organic compounds (VOCs) in soils. What followed was an apparent increase in low level toluene detections (“hits”) above the limit of detection. Bureau Veritas suspected that methanol’s ability to act as a “sponge” for VOCs might increase the likelihood of contamination, so a study was undertaken to verify this.

Bureau Veritas reviewed analytical results reported over a six month period (prior and post introduction of methanol sampling). An increased frequency of low level “hits” was identified as shown in Figure 1 below. For example, in BC the frequency increased from 0.9% to 4.6%. Of the samples that included toluene “hits”, 75% were between the RDL of 0.02ug/g and 0.05ug/g, and 90% were below 0.1ug/g. Furthermore, a number of toluene “hits” occurred in sandy or rocky soils at sites with no history of toluene use. Although toluene can be naturally occurring, it is associated with high organic content soils and not mineral soils. This suggested that contamination was introduced during sample collection or analysis. 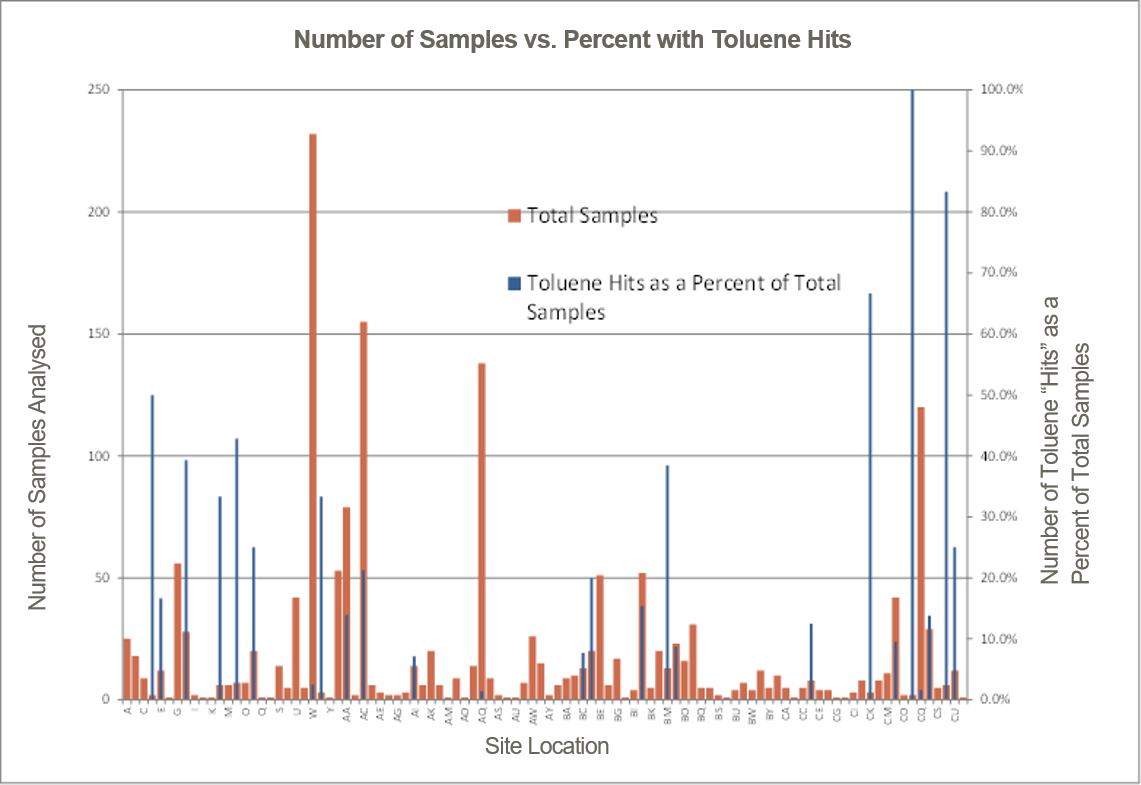 The investigation was later expanded to include other sampling materials. A key finding was that packing tape often used to seal coolers and often used by field technicians to secure labels can contain high concentrations of toluene that may contribute to sample contamination (“hits”). Levels varied widely with brands and some examples are provided in Table 1 below.

In addition, most tape products tested contained traces of other VOCs, but toluene was by far the principal VOC. One exception was Cantech 257-00, which contained 13 mg/kg acetone.

Controlled experiments were conducted in the laboratory on the two highest toluene-containing tapes (U-Line S6533 & S7593). They were left in proximity to sealed methanol vials with septa caps over a 5 day period. The data showed “hits” up to 0.16 ug/g, equivalent to 8 times the soil RDL of 0.02ug/. The effect was mitigated using solid cap vials, however detectable levels below the RDL were still observed. The toluene concentrations reported in this study are comparable to or greater than the low level “hits” identified in customer submitted samples.

In order to minimize the chance of the introduction of air borne toluene, Bureau Veritas recommends the following: