Radionuclides are naturally present in air, water, soil and rock. They originate from uranium, thorium and potassium-40 present during formation of the earth. Naturally occurring radioactive materials (NORM) are common in low quantities throughout the natural environment. They are in rocks, building materials, and even our bodies, given that we ingest and inhale radionuclides found in air, food and water. Figure 1 below shows that the majority of human exposure to radioactivity is from natural sources (76%), while a lesser amount (24%) is from anthropogenic sources [1]. 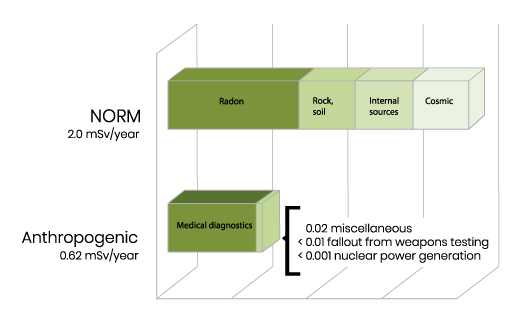 When human activities concentrate NORM or alter them in such a way that it increases exposure to people and/or the environment the resulting product is termed Technologically Enhanced Naturally Occurring Radioactive Materials (TENORM). Common activities that generate TENORM include: oil and gas production, mineral extraction and processing and phosphate fertilizer production.

NORM is regulated in Canada at the provincial and territorial level, typically following Canadian Guidelines for the Management of NORM (Health Canada). The Guidelines indicate that NORM may be released without radiological restrictions when the associated dose is not greater than 0.3 mSv/year. Table 1 below shows the Unconditional Derived Release Levels (UDRLs) for diffuse NORM.

NORM is found in the liquids and gases of hydrocarbon-bearing geological formations. As a result, drilling cuttings, fluids, mud, brines and flow-back water along with the oil, gas and produced water may be radioactive. The higher the salinity of co-produced water, the more NORM are likely to be mobilized.

Radium is the major radionuclide associated with TENORM in oil & gas production, both as a source of radiation in scales and sludge and as the source of radon. Radon is transported as a gas downstream from its radium-226 parent and deposits as lead-210 and polonium-210 scale in pipes. Figure 2 below shows the potential concentrations of radionuclides. Ionizing energy from these radionuclides poses a health risk to workers, particularly during maintenance, waste transport and handling and decommissioning. It also poses a risk to the public as a result of spills and improper or incompletely-treated disposal. 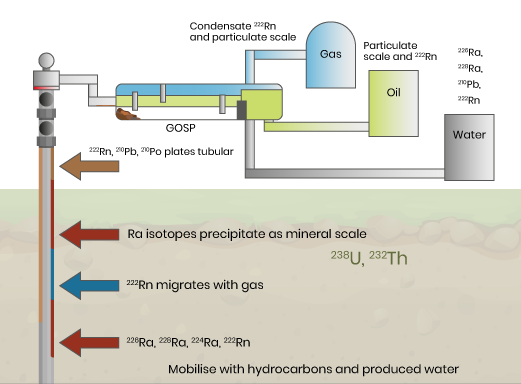 Bureau Veritas recommends gamma spectrometry as a first step for analysing major natural radionuclides: Ra-226, Ra- 228 and Pb-210. These measurements can be used to evaluate the material against the NORM UDRLs for scale, drilling mud, cuttings, sludge, water, flow-back water or brines. Other analytical techniques may also be necessary.

Mining and processing of mineral ores can generate large quantities of TENORM waste located in ore tailings and smelter slag or in concentrates. Although any mineral extraction or processing may generate TENORM, it is always associated with:

Analysis for NORM in Metal Mining and Processing

Gamma spectrometry is a good first step for analysis of major natural radionuclides: Ra-226, Ra-228 and Pb210. These measurements can be used to evaluate the material against the NORM UDRLs for solid concentrates, wastes and waters. For processed samples, it is helpful to determine the uranium-238 and thorium-232 activity using neutron activation to provide concentrations of the parent radionuclides in the decay chain. The density of the material affects the gamma spectrometry determination and extended counting on a finely-divided powder is usually required for these types of samples. Other analytical techniques may be necessary to screen for radioactivity. Bureau Veritas provides analysis of metal in effluent, including Ra-226 analysis by alpha spectrometry to comply with the Canada Metal and Diamond Mining Effluent Regulations.

Many building materials, such as granite, concrete, gypsum board, ceiling tiles and fire brick may contain elevated levels of radionuclides, particularly radium-226, thorium-232 and potassium-40. Materials may be tested prior to use in construction projects to determine the activity level and human exposure. Materials may also be tested during demolition and prior to disposal to ensure the UDRLs outlined in the applicable Canadian or other guidelines for the management of NORM are met and the material can be disposed of at landfill sites. There is a large range of radioactivity in building materials depending upon the content of the raw material source as shown in Table 2 below.

Phosphate rock used in fertilizer production is a source of NORM. Ores can have high radioactivity due to uranium, thorium and radium. Processing with sulfuric acid enhances the concentrations in the beneficiated ore, retaining Ra226, Th-232 and U-238.

Most waste disposal sites are now equipped with portal monitors used to detect radioactivity in material for disposal. These detectors generally do not indicate the radionuclides that are present, only the overall activity level. Waste such as ceramics, brick, cement and stones can trigger radioactivity monitors at disposal sites.

Analysis for NORM in Waste or Recycling

Gamma spectrometry is a good first step for analysis of major natural radionuclides of concern. It can often be challenging to obtain a representative sample from a diverse mix of waste. Bureau Veritas analyzes a large, 500 gram sample to minimize sub-sampling bias. The material does not require special disposal if it is below the UDRLs outlined in the Canadian Guidelines for the Management of NORM.

[1] Adapted from Canada: Living with Radiation. Atomic Energy Control Board, 1995

[2] Canadian Guidelines for the Management of NORM. Health Canada, 2013